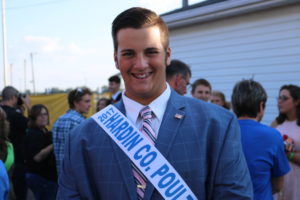 When it comes to the most exhibited project on the fairgrounds, it is also one of the easiest to exhibit.

In this edition of #ShowboxSaturday, we sit down with former poultry king, Chase Fleece. Fleece is a member of the Buckeye Shooters 4-H club, and a member of the Kenton-OHP FFA Chapter. He has been showing poultry projects at the Hardin County Fair for seven years.

Fleece said that first year showmen should trust in their ability to present their animal during a show. Chase also said that he encourages all members to participate in the showmanship contest to learn and experience more. Fleece said embracing that opportunity will lead future exhibitors to become a master of their craft.

Chase said that beyond the basics, a simple bottle of hand sanitizer is recommended. Fleece said that hygiene is important when it comes to being at the fair and handling livestock. He said keeping a disinfectant in your show box will help cut down on the risk of becoming sick.

In addition to his poultry production project, Chase has an Agricultural Communication SAE where he covers agriculture news and events for WKTN Radio. Fleece is also active in public service and athletics.

Mark Light, OSU 4-H Extension Agent, stated most Jr. Fair Livestock should be in possession by now – the deadline was June 1st.  He also noted the Sheep Weigh in is scheduled for this Saturday, June 9th from 8-11am.

Corey Ledley and Greg Liedel moved to approve the May Board minutes.  Motion passed.

Corey Ledley discussed the minutes from the Executive Committee Meeting that was held on May 30th.  Mark Garmon and Jason Fulton moved to approve the executive committee minutes that dealt with the cleaning of the restrooms in the community building, giving a rental discount to a family reunion group who made accommodations to moving their rental date, and installing a permanent fence behind the west camping area.  Motion passed. Paul Ralston and Jack McBride moved renew Kolt Buchenroth’s contract for another year. Motion passed, with Kelly Buchenroth abstaining from the vote.

Kelly Buchenroth, representing the ground’s committee, stated the natural gas contract is being reviewed.  It was announced that the grant through Keep Hardin County Beautiful for paint from Sherwin Williams was received.  Board members will be painting the machinery building on a work day to be scheduled. Gary Casteel asked for approved to do a few electrical projects, which were granted by the board.

Craig Stump, representing the Camping Committee, stated Judi Cronley was able to offer 12 new camping spots to fair campers this year.  Craig will be calling 3 campers who haven’t paid for their spots and if not paid by June 8th, their spot will be given to someone on the waiting list.

A social media report was reported by Brad Murphy.  Tickets for the Saturday night concert with Dylan Scott and opener “Brown and Gray” are on sale.  All tickets, including reserved seats, can be purchased by going to the fair’s website www.hardincountyfair.org or by coming in to the office on Wednesday or Friday’s between 9am-4pm.  Posters for the concert will be distributed soon.

Livestock judges are still needed for the Dairy Dept. and Beef Dept.  Kelly Buchenroth discussed a dairy beef feeder weigh in issue. A new rule will go into effect next year dealing with a maximum weight being needed for dairy beef feeders at weigh in.

Janie Seiler, chairperson of the rides/concession’s dept., stated contracts for vendors and concessions are due next Friday, June 15th.

Sherri Beale, representing the Jr. Fair Board, stated their next meeting is scheduled for Monday, June 25th at 7pm.  She asked for livestock dept. chairperson’s to be present at the meeting, to discuss with the kids what their duties will be like during the fair.

Brad Murphy, representing the advertising/sponsorship committee, discussed a contract between WKTN and the Fair.  Howard Lyle discussed the July 4th meeting minutes from May 14th.

The contract for 2 way radio rentals during the 2018 fair was discussed.  The 3 year contract with Audio Innovators will be fulfilled this year.

Judi Cronley stated box seat letters have been sent with their payments due by the end of June.

The District 2 Spring Meeting is scheduled for Saturday, June 9th at 9am at the Auglaize County Fairgrounds.

The 2018 Hardin County Fair Premium Book is now available on line or can be obtained at the Fair Secretary’s office.

A 4th of July committee meeting is scheduled for Monday, June 11th at 7pm in the fair office.

Jr Fair entries can now be entered through the fair’s website until July 31st.

Director’s t-shirts were discussed, to see who needed them.

The next regular board meeting will be Wednesday, June 27th at 7:00pm in the Fair Office.  Note: this meeting is one week earlier, due to the 1st Wednesday of July being on July 4th.